On November 24, 2021, H.E. Robinson Jean Louis, the Ambassador of Madagascar to China, cordially met with Huang Yanjiu, the Director of China Sam Enterprise Group Limited (hereinafter referred to as "Sam Group"), and Xu Changyu, the Vice President of Sam Group in Beijing, and held friendly talks. (From the left to the right: Huang Yanjiu, the Director of Sam Group, H.E. Robinson Jean Louis, the Ambassador of Madagascar to China, Xu Changyu, the Vice President of Sam Group)

The Director Huang Yanjiu and the Vice President Xu Changyu first thanked Ambassador Robinson for the meeting arranged, and gave a brief introduction of Sam Group.The Director Huang Yanjiu said that Sam Group had rich resource reserves and solid business foundations in energy, chemical industry, trade, investment and other fields, while Madagascar had significant advantages in energy, minerals, agricultural and sideline products. Therefore, the Madagascar market is promising. Sam Group is willing to seize this important opportunity and actively participate in the cooperation between China and Madagascar in the fields of energy, minerals, agricultural and sideline products trade, and infrastructure construction, so as to boost Madagascar's economy and social progress and maintain the sustained development of the bilateral relations.

After listening to the briefing of the Director Huang Yanjiu and others, Ambassador Robinson welcomed their visit. He introduced that Madagascar's national economy was dominated by agriculture and its industrial foundation was relatively weak, but it was rich in mineral resources, of which the graphite reserves rank the first in Africa. After joining in the "Belt and Road Initiatives" construction, Madagascar has become an important bridge of Africa and China. Since the “Belt and Road Initiatives”memorandum of understanding has been signed in 2017, Chinese enterprises and institutions have actively participated in the development of various sectors in Madagascar, and created a substantial number of employment opportunities. It has made great contributions to the economic development of Madagascar. Thus, Madagascar welcomes Chinese enterprises to conduct in-depth cooperation in mineral investment, agricultural science, bilateral trade and infrastructure construction, so as to seek for the well-being of people of both countries and the healthy and sustainable development of Madagascar-China relations. 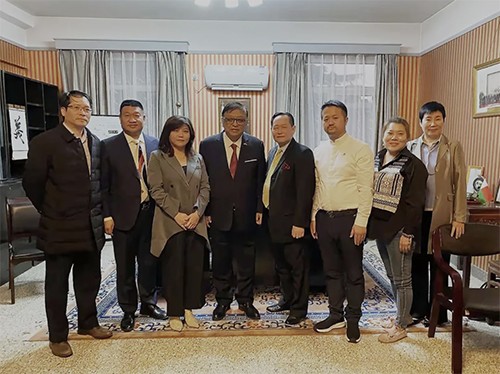 Sam Group has always responded positively to the needs of national strategic development, and has been actively developing economic and trade cooperation with the countries along the routes and the regions. We are willing to make great efforts to invest in Madagascar, and strive to contribute to the development of the bilateral relations.